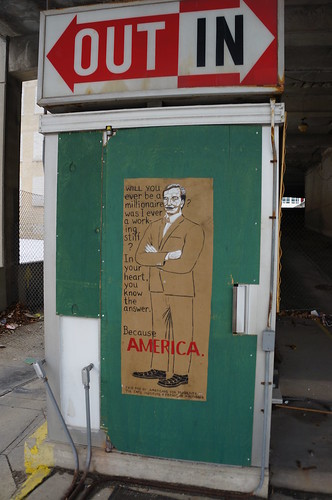 Celebrity author Malcolm Gladwell wrote a book that appears to contradict the class interests he usually represents. I’m not exactly sure why, but i’m glad he did. This isn’t a very good book by most standards: as other people noted, it lacks any advice on how to fix the lack of meritocracy in our society. More troubling for me, Gladwell doesn’t go anywhere near far enough with the premise he chose for his book. The notion that we live in a country where all you need to succeed is gumption, hard work, ambition, etc., is nothing less than a part of the official mythology of America. To say that this myth also happens to be flat out untrue carries a certain amount of responsibility to set right this wrong, it would seem– one could write volumes on this subject, and another writer would. Gladwell doesn’t see it that way: he believes he is merely the “dispeller” of faulty ideas, him and those Freak-O-nomics jerks, responsible to no one for anything. It is the responsibility of all the rest of us citizens of this free and till recently believed to be meritocratic nation to take the information he’s provided and do something about it.

Still, I am glad he took the subject on. It’s hard to over-emphasize how important it is. Among the main points in his book are the following:

To Gladwell, it may be fascinating to delve into the minutia of the subject: hockey players are vastly more likely to be born early in the year because the junior leagues tend to take kids born in a calendar year, with the result that the kids born earlier are bigger and therefore better at hockey. To the rest of us, this means that we are mostly shit out of luck: while there are times and situations where the po’ boy can make good, by and large the odds are stacked against us.  Last week, Oxfam announced that the richest 1% now own 99% of the wealth, worldwide. That’s something to think about, unless you’re in America, where every boy or girl can become the president.

If you want to read someone who went much deeper into these subjects, and actually had a conscience, read C. Wright Mills. “The Power Elite” tackles many of the same issues as “Outliers,” but was written half a century earlier (small allowances need to be made because of this: in C. Wright Mills’ time, for example, the Joint Chiefs of Staff were immensely powerful. In the 1980’s they were taken out of the direct chain of command of the U.S. military, now serving an advisory role only. Obviously, corporate power has grown exponentially since the 1950’s).  These trifles aside, reading C. Wright Mills will give you a clear picture of how our world operates, then as now. Reading Gladwell will make you wish he got a soul, mostly.